From the governor’s overreach to an out of control federal government and a House majority that’s trying to raise costs for Minnesotans just about every way conceivable, there is a lot on our plates this week so here we go: 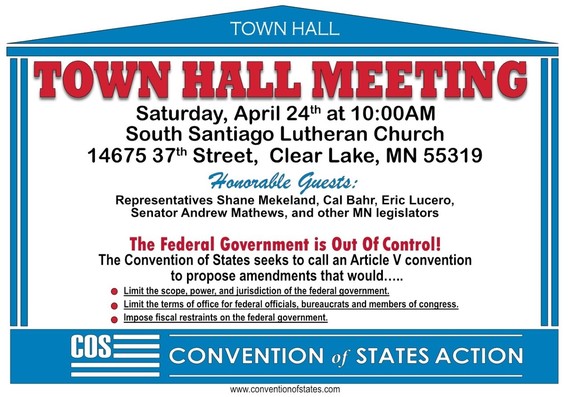 If you think the federal government is out of control, let’s have the discussion. Let’s hear your thoughts. I will be joining several of my legislative colleagues in conducting a Convention of States Town Hall Forum 10 a.m. Saturday, April 24, at South Santiago Lutheran Church in Clear Lake.

Many constituents have expressed their concern to me over the direction the federal government is taking with its unsustainable spending increases and its trampling of states’ rights provided under the 10th Amendment.

Article V of the U.S. Constitution gives states the power to call a Convention of States to propose amendments that, “limit the power and jurisdiction of the federal government, impose fiscal restraints, and place term limits on federal officials.”

What are your thoughts on this? Do you think we’ve reached the point – or passed it long ago – where we, as a nation of states, need to put a halt to the nanny nation and return responsibility to citizens to do what’s best for themselves and their family? I’m looking forward to a great conversation during this upcoming meeting and hope you are able to join us.

Speaking of checking powers, House Republicans voted once again this week to end the governor’s emergency powers that now have been in place for more than one year. Yet, once again, for nearly the 20th time, House Democrats blocked our move and voted to let one person continue calling the shots instead of having 201 legislators involved in the process.

And it only gets worse. Not only has the House majority kept a muzzle on citizens by denying them the representative system of government our Constitution provides, this week they blocked a House Republican bill that would allow Minnesotans to vote on whether greater oversight on a governor’s emergency powers is appropriate.

Specifically, upon enactment of H.F. 101, ballots for the 2022 general election would pose the question: “Shall the Minnesota Constitution be amended to limit the governor's emergency declaration to seven days prior to legislative approval?”

Current Minnesota statute allows the governor to maintain his executive order so long as the Legislature does not take action to end it. While Gov. Walz has kept his grip on our state for 13 months and counting, the public would be better served by taking the opposite approach, where legislative approval is required for a governor to extend emergency powers beyond an initial seven-day window. If the Legislature weren’t in session at the time a governor invoked a peacetime emergency, he could call a special session for his executive powers to be extended for up to 30 days at a time, according to this bill.

For anyone who may have received misinformation indicating this bill somehow strengthens a governor’s ability to keep his emergency powers, this simply is not the case and I urge you to read the bill at this link. The language clearly states a governor’s emergency powers will expire after seven days unless an extension is approved by both the House and the Senate.

Unfortunately, the chances of Minnesota voters having a say in this matter diminished significantly when Democrats in the House Rules Committee, in a party-line vote, stopped the bill from reaching the House floor with no further action imminent.

Simply, House Democrats have blocked nearly 20 attempts by Republicans on the House floor to end the governor’s powers and now they won’t even let citizens have a say in the matter. This bill obviously would not help our immediate situation, but it would be good to put this issue to the people to see if they want greater checks and balances for the future.

House Democrats have begun their parade of budget bills, bringing massive omnibus packages to the floor for votes. The Housing Finance and Policy Omnibus was first out of the chute this week and, by its title, you would think it would help provide affordable housing. Guess again. Instead, this bill includes more costly mandates and does nothing to address rising home costs or to make housing more affordable. Furthermore, this bill removes local control, takes away the autonomy of housing providers to exercise their property rights, and inhibits the ability of communities to build new single-family homes and developments.

We need housing policies that make it easier and more affordable to build new homes in Minnesota. We should be addressing the shortage of market-rate housing, the high cost of developing housing, and making it easier for Minnesotans to achieve the dream of owning their own. This bill does nothing to actually address the cost drivers behind the rising cost of homeownership.

And we haven’t even gotten to the House Democrat tax increases, including the $1.6 billion hike over four years in the transportation bill we touched on last week that is expected to hit the floor later today. Then there is the House tax bill and its $1 billion increase expected to come up next week.

Lots going on between now and when the House is set to adjourn May 17 and I’ll do my best to keep you in the loop.