In 2019, Second Amendment Republicans held off bills that would have restricted the rights of law-abiding gun owners. Our job is by no means finished because it has been pretty clear the House majority was bent on pushing anti-gun rights bills again this session.

On Thursday, they did just that, voting to approve one bill that expands background checks and another that violates due process.

As someone who holds the Second Amendment in extremely high regard, I strongly object to both bills and voted no as the House Democrats approved them despite bipartisan opposition.

Here is a quick look at each of the bills:

Background Check Bill (HF8): While supporters of this bill claim this is about background checks for gun purchases, this bill creates new regulations that will prevent routine transfers between friends and family. In addition, permits to purchase would be limited to one firearm every 30 days, effectively creating a state level gun registry.

Interestingly, House Democrats conducted a social media poll this week and, while we can’t make too much of social media polls, the overwhelming opposition says something. With roughly 8,500 votes registered, almost 90 percent of survey responders said they oppose universal background checks. House Democrats removed the survey from the Internet just hours after it was posted, 19 hours before it was set to close. 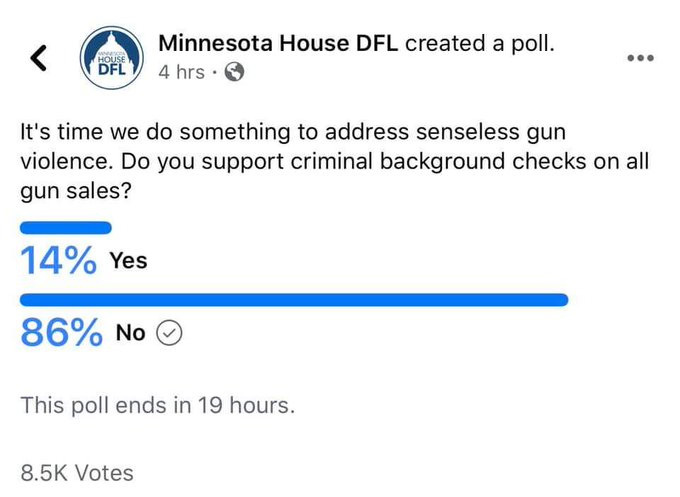 Red Flag Bill (HF9): Supporters of this bill have highlighted the need for a red flag law to “temporarily” seize guns from people perceived to be a threat to themselves or others. This bill violates due process and will not stop those who are intent on doing harm to others.

We have laws in place to remove guns from people who may be considered threats to themselves or others. Those going through mental crises can be placed on a 72-hour emergency hold for medical evaluation and potential commitment for further treatment. In cases of domestic violence, Minnesota statute currently directs officers to make an arrest if they believe that domestic violence has occurred in the preceding 72 hours or if the person poses a threat to the alleged victim.

While House Democrats approved these bills, Senate Republicans have indicated they are non-starters so we can defend the Second Amendment once again this year.

The House Energy and Climate Finance and Policy Division heard a bill this week that would expand the state’s community solar program. It is right from the Green New Deal playbook.

I oppose the bill for numerous reasons, starting with the fact the solar program has strayed from its original purpose. The intent of Minnesota’s community solar gardens originally was to provide access to solar power to renters, condo owners, and other residential customers without the capability to install rooftop solar panels. Now, over the past few years, we have seen this evolve into a lucrative subsidy program for the benefit of out-of-state corporations.

Xcel Energy estimates that 87 percent of existing gardens are owned by out-of-state corporations. Xcel also estimates the solar program imposes an extra $143 million per year in costs on electricity customers. Solar gardens provide only 3 percent of Xcel’s electricity, but represent 21 percent of the utility’s fuel costs.

On top of it all, solar gardens are not displacing coal and natural gas power, they are crowding out cheaper and more efficient solar power alternatives, costing more than triple the rates charged by competing technology.

This bill is so misguided we could go on further, but the main point is that instead of expanding this program, we need to get back to the original purpose of serving residential consumers and that’s what I am advocating.